A few years back I purchased and watched the excellent documentary about the Polynesian pop and tiki scene called "Tikimentary".  It featured video footage from the Hukilau gathering at the Mai Kai, located in Ft. Lauderdale, FL, as well as footage from Tiki Oasis; which if you didn't know takes place annually in San Diego, CA.  Among all these fantastic visuals were interviews from tikiphiles from all over the USA including Paul Spencer and Kelly Camille Patterson.  This led to me finding Kelly's fantastic YouTube webseries "The Velveteen Lounge Kitsch-en". 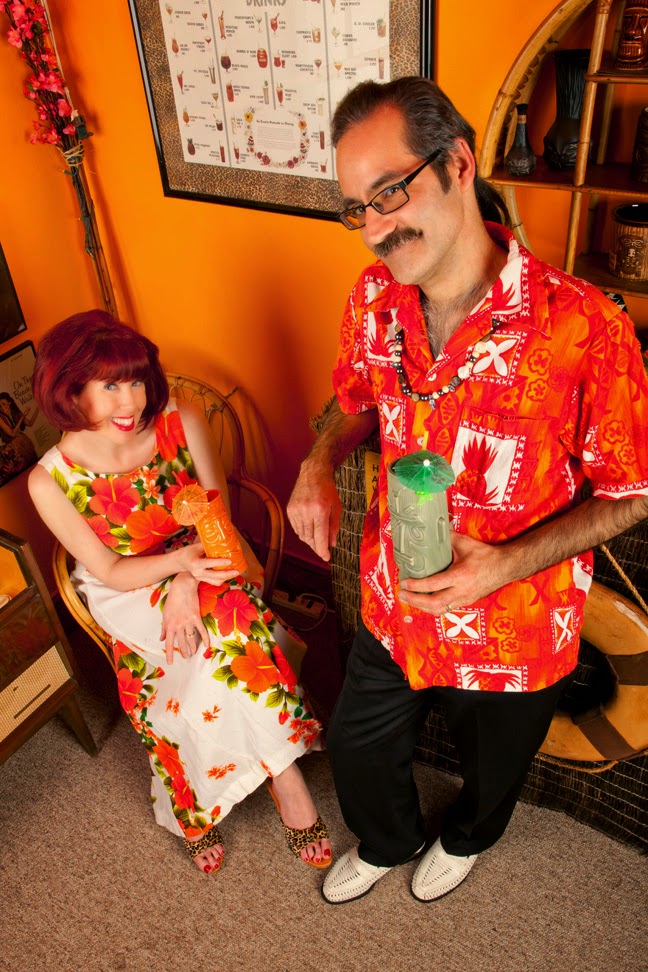 Each week, on a Tuesday, Kelly posts a video featuring a kitsch take on hosting and entertaining with some appetizers and cocktail drink recipes.  She offers some advice on cooping with present day matters, seasons, and filling your life with more kitsch with some colorful food and tropical libations.  Below is an interview I did with her as I wanted to know more about the background of Kelly and her Kitsch-fabulous show! 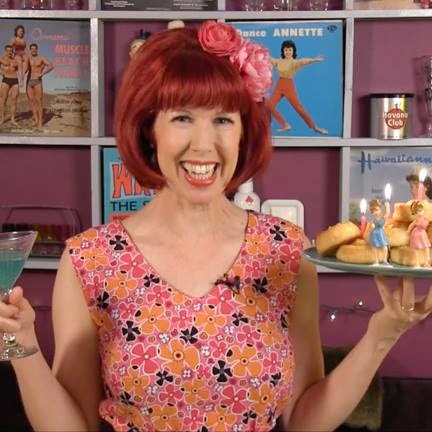 1. Tell me a little about your webseries. When and how did it begin and what inspired you to start the series?
It started as a one-time thing, when I was given the challenge of creating a 50's cooking video. It was well-received and we had such a great time that we just kept going! It’s funny how different it looks now to me from when we began. The first one has a really loud refrigerator running in the background and it has become more “retro” at this point than specifically 50's. 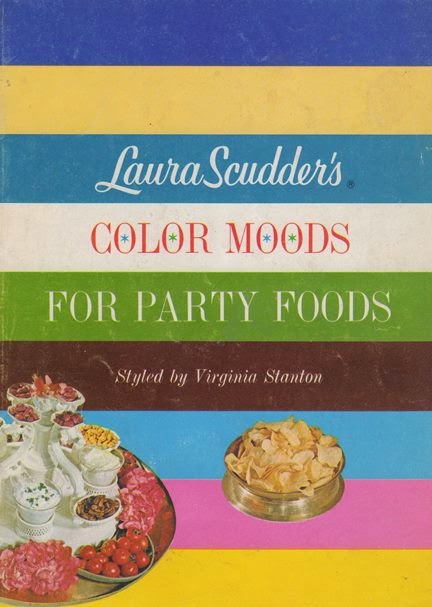 2. When did your love of tiki first begin?
I grew up in Southern California, around boats and the water, so I was always exposed to the nautical side of tiki. Driving with my parents I’d see tikis outside of restaurants and was always fascinated. I always saved the umbrellas and cocktail monkeys that came in my kiddie drinks when we’d go out. Also, my aunt was a Continental flight attendant from the mid-60's until the early 2000's and her route was Honolulu when I was a kid, so she was always had swizzle sticks and great photos. It all came together in my mind as pretty amazing! 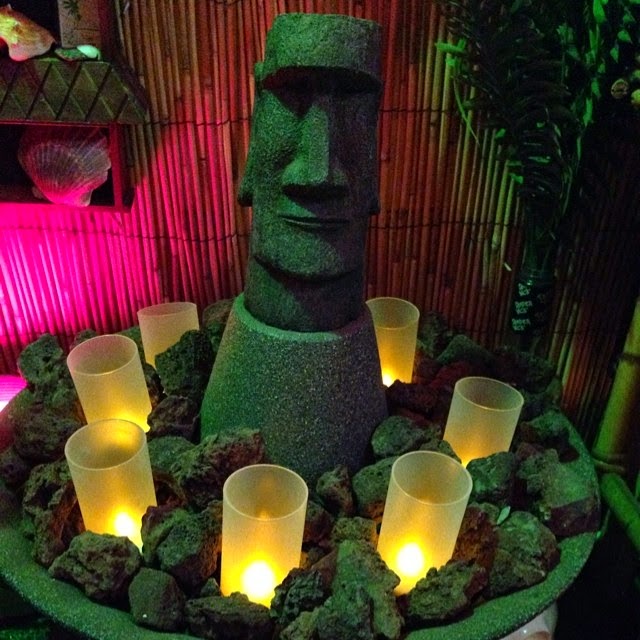 3. Do you remember your first tiki drink or tiki purchase? What were they?
My family bought me the bar you see in our episodes at an antique mall back in 1994, before I even had a place to put it! My mother kept it on her porch, covered with a tarp, for months. When I moved in with Paul it became the centerpiece of our living room and of course we needed to stock it! Our first cocktail book was the Sardi’s Bar Guide, which is really weak on tropical drinks, but I still love that book. We later discovered Beachbum Berry and our tropical drinks improved tremendously! Our first tiki purchase was a mug in a thrift store – a screen printed souvenir mug from a college fraternity party! 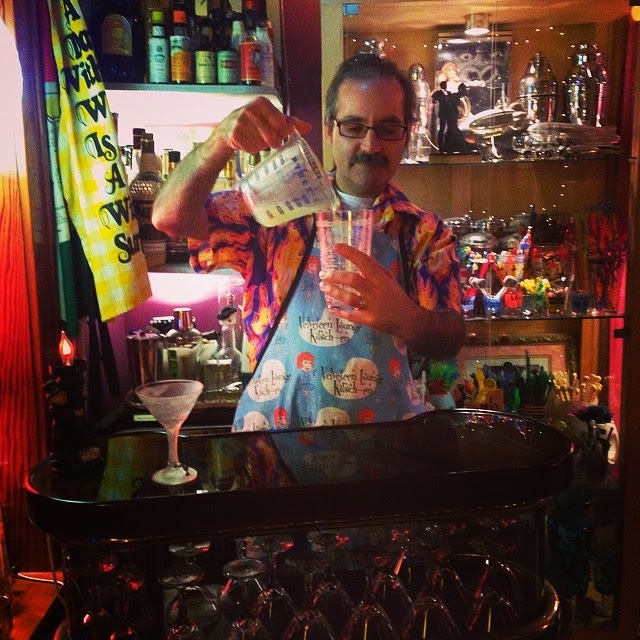 4. What is your most treasured vintage item and why? Do you remember where you found it or how you happened to come across it?
Definitely our bar, which I described above. Other treasured items tend to be things that have been handed down in our families, such as the Trader Vic’s swizzle stick that my mother-in-law saved the night she got engaged in the early 60's and things my aunt brought back from her travels in the 60's and 70's. 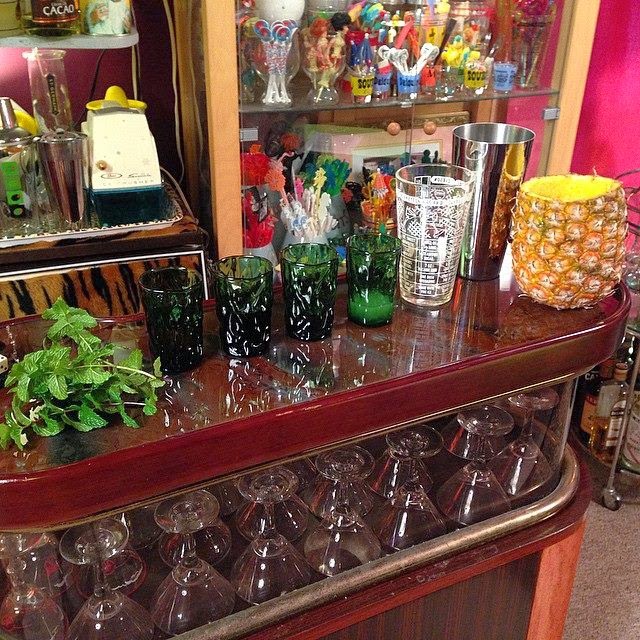 5. Do you have a favorite web series episode?
For our show it’s tough for me to say, since they’re all kind of my children. I think my favorite moments are when something I have in mind, like a special effect, works the way I’d hoped or when we pull off something that we did not think we could get away with, like shooting at our local courthouse or on the steps of City Hall! 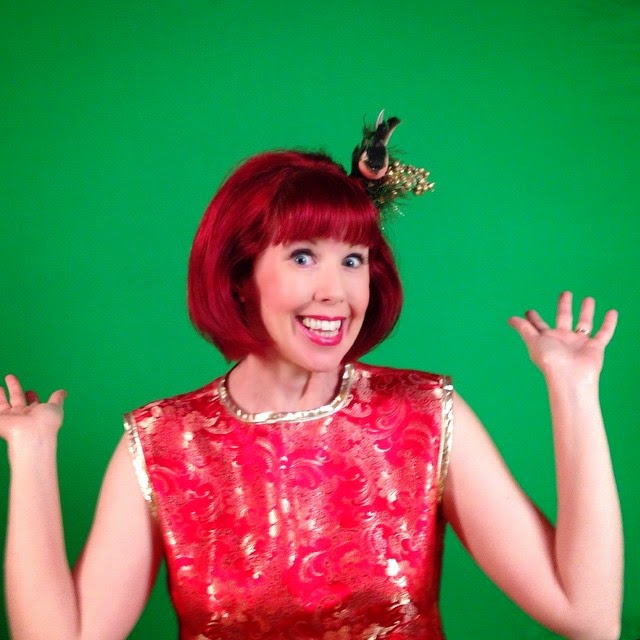 6. What about a favorite recipe or drink recipe?
I love most cocktails, but am partial to tequila and champagne (not necessarily together, but that can be nice, too!), so I do a lot of Margarita and French 75 variations. My absolute favorite thing to eat, which only happens once or twice a year, is lobster. Lobster and champagne together is like heaven for me! 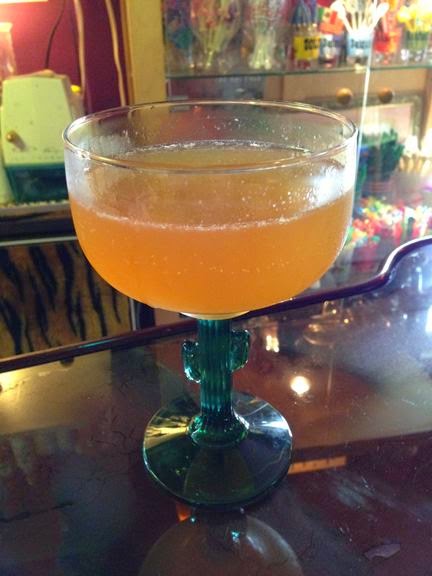 7. What are the top ten must haves for a home tiki bar?
Tikis, rum, limes, tiki mugs, exotica/surf/hapa haole on the sound system, stuff collected from your travels near and far (not stolen, though!), paper parasols, ice, good friends and someone who wants to tend bar! It’s wonderful to have items like puffer-fish lamps and fishing floats, but my favorite details in any bar are the unique touches that the owner has added, such as a bust of Elvis or a photo of their grandparents in Hawaii in 1960. 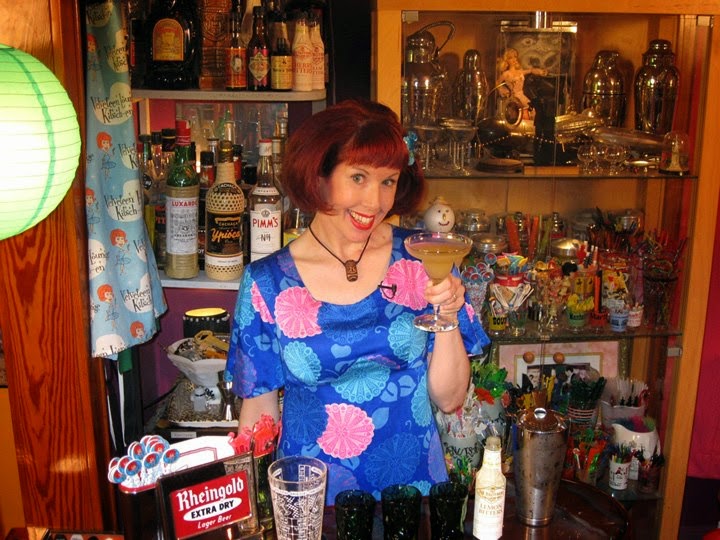 8. Do you have any good advice or tips for anyone that has considered starting a web series?
Do it! It’s a lot of work and can take over your life, but it’s amazing having a project that is entirely yours. We were completely clueless about things like promotion when we started, so we’ve played a lot of catch-up, but there are lots of resources out there to help you, such as the YouTube Creator Playbook (on the YouTube site). 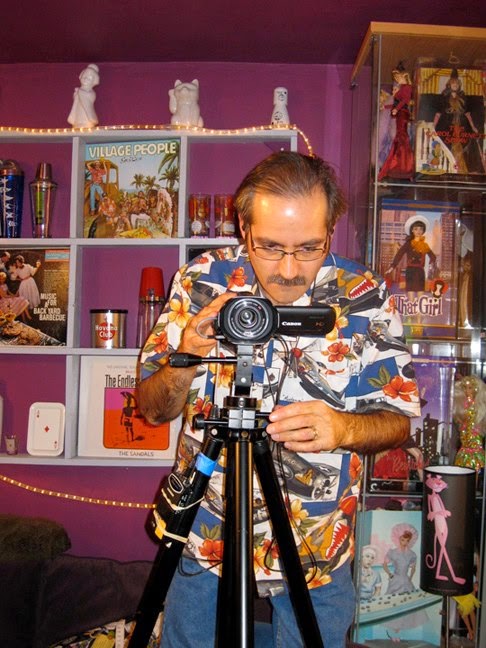 9. What has been your favorite and or most gratifying part of creating and being a part of this series?
As an actor and writer it is amazing for me to have the ability to write and do whatever I want. I’ve learned that I really love producing my own work and not having to answer to anyone. We’ve also met so many great people on this journey and had the opportunity to teach at Tiki Oasis and shoot at places like the Mai-Kai, Frankie’s Tiki Room, Tonga Hut Palm Springs, Plimoth Plantation and many more. I wouldn’t trade a minute of it. 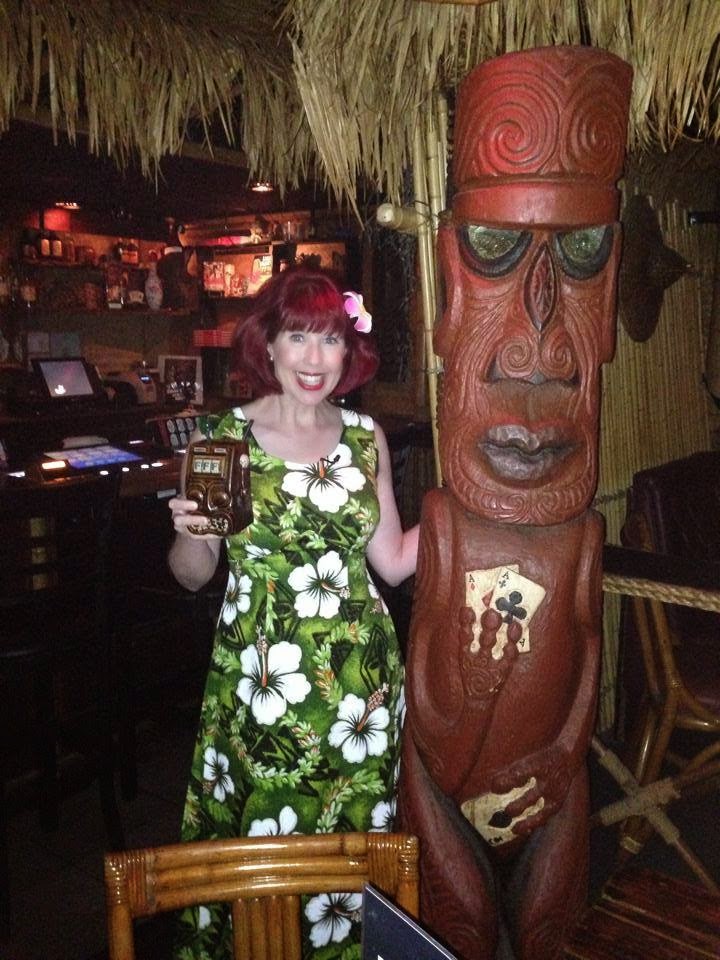 10. What is on the horizon for The Velveteen Lounge? What can we expect next for the series?
We definitely want to do more location shooting and road trips. More music videos are on the horizon and I definitely want to shoot at more events. I also have a fantasy of completely remodeling our kitchen into the vintage TV studio of my dreams. That one may take a little while!

http://www.velveteenloungekitsch-en.com/
Posted by Sweetie Suz at 10:19 AM

Sweetie Suz
My name is Suzanne and I'm a hard working gal that is obsessed with anything produced between the 1920's and 1960's. I love the thrill of the hunt while thrifting and antiquing. I feel as though it is one of the many things I do to live by the reduce, reuse, recycle mantra. Follow me on my journey through my many vintage adventures!